It's been a semi-quiet few days for ZGG, we received a wardec towards the end of last week due to the history and the alt of a member of the corporation. After speaking to the Corp CEO that war dec'd us I thought we could resolve this quickly, after removing the member of our corporation they had an issue with, but it turns out that wasn't enough and they believe that we have links to their main target.

What these links constitute I'm not 100% sure but I'm guessing they think we are a front for them in mining operations and provide income outside of pirating, or that I have influence over them and can get them to surrender or present terms.

Honestly I don't know, what I do know is that outside knowing members of the pirate corporation outside of the EVE universe we (ZGG) have no relationship, understanding or agreements with the pirate corporation and it is only due to "coincidences" (as the CEO put it) that they will continue to keep the war dec active on us.

I started two previous corporations only to have them close rather quickly because we were bullied by war declarations, but ZGG is different it has a purpose and I won't be bullied into closing it.

So far the war between the two sides has (to my knowledge) been something like the phoney war in 1939, posturing and much discussion but little action. The tactic both sides are employing seems to be mind games and I don't even think they've met in battle yet, I could be wrong.

Either way ZGG is caught in the middle and must make do, fortunately skill training doesn't need space time so I've queued up some nice skills and will be making the most of it.

We've also managed to get hold of, rather cheaply, two nice BPC's for the Armageddon and Harbinger ships which we are currently planning on doing production runs with. Both are ships in high demand and even selling at mininum cost we should make a tidy profit, enough to invest in higher yield mining equipment and possibly even a new Hulk for Corporation use. I'll go into detail in a later post but it will be my and ZGG's first foray into manufacturing.
Posted by The Captain at 09:19 No comments:

An email and blog post last week from CCP certainly has generated a lot of user comment, I agree that the logic of training skills specifically to increase the speed at which skills are learnt is very confusing.

I've setup a few characters and one of the things I learnt early on was that the learning skills really needed to be trained to Level 4, unlocking the advanced skills which then needed to be trained to Level 4 too. Training all the learning skills to level 4 easily accounts for a quarter if not closer to 50% of the 1.6 million SP that new players had where training was running with a 100% bonus.

The changes (main bulletpoints) that have been made remove the Learning skills, reimburse (for reallocation) all Learning SP's, additional 12 base points to each attributes, and the removal of the new player 100% bonus to training (up to 1.6million SP's).

The general concencus on the EVE Forums and speaking to people I know in game is that this is a postive change and the reimbursed SP's are something that will be very useful to most players. I know a couple of characters of my friends have over a million Learning SP's and they are already spending time in EVE Mon trying to work out what to add them too.

Personally, my three in-game characters have about 320k, 380k and 800k to redistrubute.

My primary account, won't get much out out of it but I plan on using the 380k I have towards either Cybernetics V or Mining Director V.

My newest account is on a fast track to a Hulk and this change will be nothing but good for him and I think his 320k of points will be used against Mining Barge V when he's ready to train that (just finished Astrogeology V).

My middle account has the largest SP to redistrubute and of course as lady luck has it he's now completed all Hulk training and so has nothing that needs it here. So I'm still looking at what to use the points for, I'm tempted by two directions:
Both would be useful so I'm undecided at this time in which to do but regardless the changes coming on the 14th December 2010 are a nice Christmas bonus.
Posted by The Captain at 08:29 No comments:

ZGG are on good terms with the only station in Dantan and the result is a slightly lower (and getting lower) tax rate when refining ores. As a result of this I'm in and out of Dantan most nights and Tuesday night was quite profitable, as well as amusing, in I managed to bag some nice loot from a couple of battles outside of the station.

I was speaking to a friend on Teamspeak and he was giving an account of a pvp kill he'd just got in Dantan (he's a pirate, he likes can-flipping), so I undocked in my salvaging Coercer with the intention of doing a run of the fields and salvaging what I could.

Exiting the station I was immediately met by two wrecks, one of which was abandoned and had some loot. I started salvaging whilst checking out the wreck. I was very happy to see some decent loot, four 625mm Artillery pieces, 18 Tech 1 drones of various types, Tech 1 (but higher meta) armour and a few other bits and pieces. I grabbed what I could, which turned out to be everything in the wreck and sped off for more looting.

Returning to the station a little while later I saw Concord was all around the entrance, had I missed a fight? Turns out I had, before I left the station there had been a group of players from Unseen University who all appear to be Polish. My friend had killed one and one of the players firing on my friend did not have kill rights and as such Concord turned up and relieved him of his Myrmidon Battlecruiser.

Turns out the Myrmidon was a good fit and the loot it dropped was worth a few million ISK and I had the Luck of the Polish that night in grabbing it before anyone else.
Posted by The Captain at 09:44 No comments:

Things are quiet at the moment here at ZGG, last night I logged on intending to help mine an Omber field that a Corp member had found in Leva. This was unfortunately a no-go as the field had disappeared with the last downtime, a search of surrounding systems with probes yielded no alternatives so the fleet disbanded.

I actually logged off early and spent time with the ol' ball and chain and had quite a nice evening, although I logged in again just before bed to rearrange some skills in my queue as during my "downtime" I decided a little change to my skill plan was needed.

ZGG is doing well considering we're in our infancy, we have a little cash available should we needed it but we're also setup well to both mine and refine effeciently. We have two hulks, two retrievers available and an Orca available for fleet ops and I'm working an Alt chracter into a position where he can fly both a Hulk and an Bestower/Impel to do transportation duties instead of having to dock the Orca when full.

We're also planning the way forward for ZGG and all members are interested in some Low Sec/Null Sec visits/mining as well as getting a POS for making Tech 2 items for sale. Seems the industrualist bug has bitten not just me in ZGG.
Posted by The Captain at 09:30 No comments:

Relocation and a new beginning

I'm high sec based and recently moved to Andrub in order to do mining in a seemingly quiet system, however leaving my current Corporation and setting up Zero Gravity Geology means that the chance for a new relocation was ripe.

I was going to remain in Andrub but a eve mail from a friend suggested we move to another system with the following reasons:
After reviewing these I saw no holes in the recommendation and packed everything into the Providence and moved to our new home.

Setting up the Corporation once we arrived was very easy, the slowest bit was resigning from my previous Corporation, rented an office and done. Applications were received from my alts and from my friend and pretty soon we were mining as if nothing had changed.

As an aside my friend had a very funny encountered with another corp whilst he was mining, the Corp he quit was a pirate one and he had been hunting another Corp's players and they happened to discover him mining whilst the War Dec was still active. Apparently the local chat was alive with discussion as to why they couldn't kill him even though the War Dec was active, I've yet to read the local transcript but the story relayed to me was very funny.

We've had another friend join us and whilst we're a pretty new corp we are already planning long term strategies for us. We'd like to get into running a POS with the eventual aim of running a Tech 2 production facility. Lofty plans but we're getting there, at the moment we're getting our refining skills updated and making sure that we can get the best yield when we run mining ops.
So it's been a busy weekend but enjoyable with the birth of Zero Gravity Geology in New Eden.
Posted by The Captain at 10:31 No comments:

I joined up to play EVE thanks to a good friend who gifted it to me when Tyrannis was on special on Steam, I must say I played thinking I wasn't going to be playing long especially as it costs real money to remain playing.

Four months later I'm still here and loving the game, whereas I read a lot in the EVE Online forums about people who have been playing far longer than me and hate the game for it's faults I'm loving it for what I can do.

I started playing and immediately started training towards a career as a miner/industrialist because that appealed to me, yes fighting in spaceships *IS* interesting but not something I wanted to do every time I played.

I'll write some more in the near future about the adventures I've had and things I've learnt but I'll leave you with the following screenshot of a mining operation I'm heading at the moment, it's small fry compared to some Corporations but this is a sight I can't get enough of and really shows off the games graphics and the sense of awe I get whenever I play. 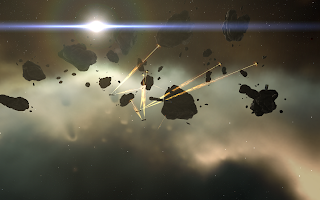 Well here I am typing what I hope will be the first in an avalanche of posts on this blog.

I'll be writing "from the hip", so to speak, covering a range of topics, my own thoughts and whatever else comes up. Primarily I want this blog to have my experiences (good and bad) of playing EVE:Online.
Posted by The Captain at 11:03 No comments: