Hunkering Down and PROFIT!

Last night was hauling night.
Two freighters made short work of the moving of product to Jita for sale. The Amarr->Jita pipe was full of reds and I made sure I used my scout to watch them and keep an eye for bumping Mach's on gates before I entered warp.
The journey was not really eventful but I did manage to pick up a war dec from PIRAT for my troubles. Interestingly the Jump Freighter pilot got the war dec whereas the freighter pilot, in a totally unrelated corp but who jumped through gates at the same time, did not.
I was tempted to send a mail to the PIRAT pilots laughing at their stupid war dec but I decided against it. A one week, stay in null sec doing profitable things could turn into a couple of weeks quite easily if I offended them.
So I remained quiet, finished my jumps and got home in time for a cup of tea and to drop off some courier packages.
Posted by The Captain at 12:35 No comments:

Watching Me, Watching You

Over the weekend a photograph of a slide at EVE_NT has left blog friend Bex with a very sour taste in his mouth. Normally I'd fan the flames and enjoy his tears but after pondering the image and thinking about the repercussions I can't help but agree with Bex. 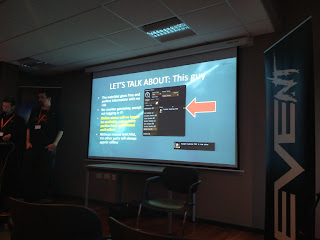 This change is terrible. Not just for wormhole players but all players.

The watchlist is an in-game feature whereby you can add a character to the watchlist and when they come online or go offline you will receive a notification. It does not tell you where they are only that they are online or offline. It is primarily used as a basic intelligence tool providing details for those in wormholes and pirating for finding out if targets are online who can then be found (if in known space) via Locator Agents.
It is a useful feature.
I currently use it for getting an indicator on whether or not bumpers and/or gankers are active when I'm moving cargo. If I see characters online then my scout, who has them watchlisted and added as contacts, will be able to see them quickly and I can either dock up or I can proceed with my journey. It works and I've avoided a few ganks I'm sure thanks to this.
I used to use it to monitor cyno droppers and reds in Providence when I lived there and I know a few people who use the watchlist solely to monitor known supercapital and titan pilots.

The watchlist will now only show whether someone is online if both you and they have watch listed each other. No longer can I watchlist a ganker and know when he's online and take defensive measures now I have to hope I've registered on his radar enough that he adds me.
But what if he adds me on an unknown alt not his main, well nothing. The watchlist won't work.

Congratulations CCP you've taken a working, albeit broken feature, and changed it enough that it will now will not work at all and will never be used by more than a small percentage of players.
RIP Watchlist.
20xx to 2016
Not sure when it was introduced but you get the idea.
Posted by The Captain at 08:42 1 comment:

The Power of Three

I've previously covered a titan kill in Mai and mentioned several times how this system in Domain is home to some extremely capable and dangerous pilots.

It's been a while since I've seen anything worthy of a post and today I was pointed this. 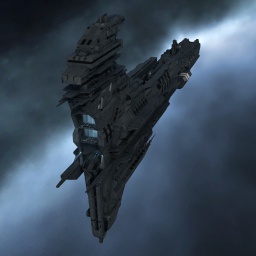 Gatchythepirate was caught in Mai by a team of three. Two Heavy Interdictor Cruisers and a Bhaalgorn managed to get the killmail.

All is quiet,
Cyno goes up
Boy finds Girl but she runs away,
Boy finds Girls again and captures her (heart),
But Girl kills self due to crippling intimacy issues leaving Boy alone, again.

It's almost like Shakespeare wrote it, brings a tear to my eyes every time.

Gather Round Children, It's Story Time

Gatchythepirate planned his entry into Mai very well and was executed flawlessly , the cyno went up and was down before anyone could enter warp. Normally this is where stories end but in this case the Wyvern remained on scan and a prober quickly entered system and was able to get a fix on the Wyvern's location and tackle was entered warp.

Tackle entered grid to see no Supercarrier, obviously the ship had cloaked but was he still on grid?
Well the answer was yes because as tackle was exiting warp they passed close enough to the target to decloak him.

The Wyvern pilot used his Projected ECM and used this to escape by entering warp. unfortunately he warped to zero at the Planet 1 POCO where he was pursued and captured again. The pilot then made a choice to self-destruct his ship as the possibility of salvation or surviving was close to nil.

Shortly after there was a rather large explosion and no more Wyvern. 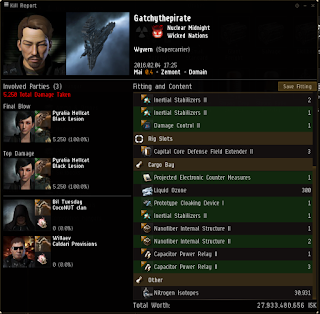 Gatchythepirate, believed to be an alt of well know super scammer PatchyThePirate, was very chilled about the loss:

Gatchythepirate was extremely unlucky and was trying to move through a very dangerous system. He almost made it, certainly more competently than others who have tried, but almost isn't good enough.

There is some talk on a Reddit post that questions why, with only three attackers, that the Wyvern didn't want until the Projected ECM reloaded (one wag thought it funny to say he did not have this skill trained because it was in his cargo, he did and did use it) before trying again and jumping out.

Loot was pretty light, this appears to have been either a pre or after sale move and as such it explains the T2 nature of the fit that is designed, not for combat but travel.

I wasn't able to contact Gatchythepirate to get his input in this but it makes sense that he didn't know reinforcements weren't on the way so he self-destructed in order to avoid being solo killed by a lone Bhaalgorn.
Posted by The Captain at 18:40 1 comment: