When I first started EVE Online I had very little experience with the different types of ship and what their pros and cons were. I used to look in the Market Browser at the different ships and decide what I wanted to fly.

I can remember my first cruiser was an Arbitrator and I loved the idea of being a support ship with drones.

I didn't use it that often, I was not one for the Pirate Life as my friends were but I did secure two kills in the ship and it still lives in my hanger to this day used rarely for ratting.

Bex used to run around in the Abaddon. It is a beautiful ship to look at but it was also an excellent mission runner for me when I moved into my first wormhole (before I was educated) and I learn the difference between Beam and Pulse Lasers thanks to this ship.

I lost my first Abaddon whilst trying to close a wormhole, Bex managed to pass through a critical wormhole in his Abaddon and I got stuck in the Great Wildlands. My (for the time) "blinged out" Abaddon did not make it back to high sec, I was killed two jumps from safety by a gate camp a minute before DT. Still, I petitioned the loss and was refunded what I lost.

A toss up between the Providence and the Orca.

I bought the Providence (which I nicknamed "the Roach" as I think it bares a little resemblance to a cockroach) from my then Alliance Leader for 750m ISK and I still have her to this day. She has moved tens of millions of cubic meters of cargo, she's survived ganks and recovered loot I can no longer remember.

Then it was the Orca.

At the time I was mining (a lot) in high sec and the boosts and cargo capacity was something I wanted, I can remember buying the Orca in Amarr two weeks before I could fly it. Two weeks of staring at the ship in the Ship list and getting excited as I watched my skill queue slowly tick down. I've since expanded my fleet to have four Orca's (two of which I built) but I still have Willy ... but he has not had an outing for quite some time.

When I used to look at the Ships on the Market it was the Archon that I used to stare at the longest. She wasn't special, she was a line carrier ship, but I loved the look and the idea of her and what she could do.

I'd been playing for nearly 2 years when I got my first Archon I used to ship spin her for no other reason that I could. The character was not well trained (Fighters III if memory serves and Spaceship Command and Support Skills all at II or III) but she was mine and I got to take her out for a POS defense in a little know system called Mai.

I can still remember that day, the POS we were defending died as I totally focused on killing the enemy rather than repair the damage but still. I got on three kill mails and my love for the Archon sky rocketed.

I still have Metropolis, when I lived in Providence she was a regular defending me in the ice belt from rats and it was a short jump to Mai or Curse from there. I could never sell her nor fit a Triage module recently when all Triage fitted carriers were converted to Force Auxiliary's.

I purchased my first Jump Freighter, an Ark, off contract in exchange for 13 PLEX. At the time I was trading in PLEX and had a nice surplus but could not find a cheap enough Ark in Jita or Amarr. So I found a contract and offered the seller 13 PLEX which they accepted.

Still have her to this day, and her sisters (as seen above) and she's the most oft used vessel access my characters. 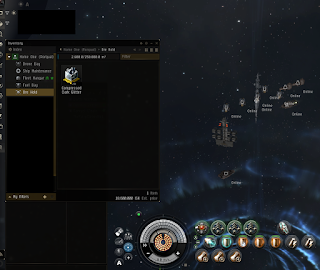 Successfully managed to login my mining fleet and actually do mining. Not a single, touch wood, socket was closed error during the process.

Update to follow on what I've found out/done to get to this point.

So happy that I seem to have made progress though.
Posted by The Captain at 20:57 1 comment: