Luck Be The Lady Tonight

When not updating my PI, Market Orders or running missions I've spent today ratting and collecting as much salvage as possible. Its been quite profitable in salvage and bounties but earlier today the alliance "Officer Expert" got himself quite a lucrative drop from our friend Tobias Kruzhor.

However I got a shock when I warped back to start another run through of the belts. Unfortunately I didn't grab a screenshot but I had six battleships appear in my overview. At first I thought it was a convoy that had spawned but closer inspection of the names of the battleships showed that I was quite wrong.

This was my first solo officer spawn, I'd been part of group who had killed two previously (one even I wrote about not a couple of weeks ago) but this was my first where I found him. A quick message and a drag/drop of the asteroid belt where he was into our local channel summoned reinforcements but I was on my own for at least a minute or two.

I immediately deployed drones and started to approach Gotan, making sure it was at an angle and not directly, but suddenly his distance to me dropped and then kept dropping. He was coming straight at me.

My drones started to eat into his shields and as soon as he came within range I opened up with my Heavy Assault Launchers too. So far I'd taken a little damage, foruntaltey his "escort" were still over 40km away and weren't hitting me but Gotan got a couple of hits on me and I was at 76% shields.

All of a sudden I noticed I was nearly stationary, was he webbing me? No he wasn't but my Afterburner was turned off and so was my Adaptive Invulnerability Field. This was quite an issue as maintaining a good speed AND the resist buff the Invulnerability Field provided were vital to my surviving. Why were they off?

I looked and saw my capacitor was empty and the neut icon was appearing above it. Gotan was sucking my capacitor dry and as such I was in a very precarious position. As if to punctuate the point I took a couple of hits at that time and went down to 45% shields.

I sent my alt off to station to reship to a scimitar, at least that may be able to keep me alive until help arrived.

I was less than 10km from Gotan and he was well into armour now but I wasn't able to take him into structure. My shields had now dropped to less than 15% but help was at hand as I saw a couple of ships exiting warp besides me.

My shields dropped to 3% and I decided it was time to leave.

As I was aligning I noticed that Acki Juc had opened fire on Gotan and this was enough to tip him into very low armour and this was punctuated again when Raven Renelard opened fire too. I saw my shields restore to above 10%. and realised my CEO, Disposable Ensign, locked me up in a "four rep-afterburner scimi" and was sending repairs my way.

I cancelled warp and overheated my HAM's. Gotan was going down.

Gotan exploded and I moved into the wreck, this was what I saw upon opening it: 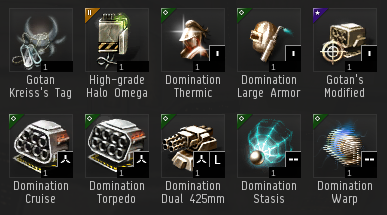 A nice collection of Green and Purple there with a yellow just to be different. All up that's about 1.8 billion ISK worth of loot. The Officer BCU is not as expensive as you might think at around 500m, the implant is actually the best of the lot with that selling for nearly 900m in Jita.

If I'd killed him solo the lot would have been mine but as it was a team effort (myself + 3 others) a cut of 300m per pilot was decided on with the remainder being mine.
Posted by The Captain at 15:11